Jay Mickens, a singer songwriting hailing from Paterson, NJ started his career as a musician at the age of 18. For Jay, music isn’t something he chooses to do, its something he can’t live without. Bringing in influences such as Jimi Hendrix, John Mayer and Dave Mathews Band, it’s hard not to hear the musicianship he applies to himself modeled after those great artists. Strong vocal melodies and harmonious acoustic accompaniment have collided in a catchy, note-worthy, soft rock sound that will be stuck in your head for days. Jay’s artistic song-writing abilities are raw and genuine — a rare gem in today’s over-produced music scene. Jay works as a professional musician, playing an average of four shows a week, and isn’t stopping anytime soon. 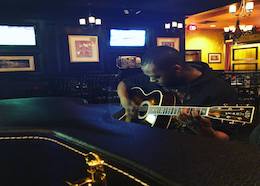